Are you ready to learn Chinese characters?

They will challenge you at first – but trust me, the first time you read a Chinese sentence (and it actually makes sense) you will feel such a rush!

Since the Chinese writing system is so drastically different from the alphabet we use for English, you learn to read and write Chinese in a completely different way.

When I first started learning Chinese at university, I learned how to read and write, but as soon as I graduated I shifted my focus to speaking and listening. Now I’m at a point where my speaking ability is much higher than my reading and writing ability and it is getting a bit embarrassing! So this year, my goal is to improve Chinese reading and writing skills.

Here is a summary of what I have learned in the process, along with links to my favorite resources and learning tools!

A Brief History of Chinese Characters

Amazingly, Chinese characters used thousands of years ago closely resemble the characters used today. They’ve gone through many iterations and standardizations, but they are recognizable to everyday Chinese readers.

Characters are made up of components called “radicals” which provide information both on how the character might sound and what it might mean.

However, this information is not systematic – you can’t look at a character and know right away what it means and how to pronounce it. I have more information on this in my earlier blog post, here.

Unfortunately, you’ll just need to memorize each character, what it means, and what it sounds like.

During the last century, several efforts were made to “simplify” Chinese characters to make them more accessible to everyone. The characters used today were standardized in the 1950’s, and have many fewer strokes than the Traditional characters.

While of course simplified characters can be learned much faster, many learners believe that traditional characters give you a more meaningful understanding of the language since they contain much more information about meaning and pronunciation. It is totally up to you which system you choose to learn, millions of foreigners learn both every year and become proficient in reading and writing Chinese.

One of the most important parts of learning to write Chinese is mastering stroke order.

Yes, it matters. I didn’t think it mattered either, and now I’m stuck with terrible handwriting that it will take me years to undo. The direction and order of your strokes will affect the shape and thickness of your lines and contribute to the overall appearance of your characters. It is definitely worth taking some time to learn the rules.

Here are the rules you will need to know!

I highly recommend you read through these rules a couple times, and see how much you can memorize. But then, just start writing. You can use the workbooks I recommend towards the end of this post (they have helpful lines to keep your writing in check) or just write on anything you can find!

The more you write, the more these rules would become part of your muscle memory.

1. Write from left to right

Most strokes are written from left to right. For example, the character 你 starts with the leftmost vertical strokes before moving on to the strokes on the right.

For example, for the character人, the right-to-left diagonal stroke is written before the left-to-right diagonal.

As an example, the character 二  (two), starts with the top stroke, and ends with the bottom stroke.

5. Outside before inside (for certain cases)

Outside enclosing strokes are written before inside strokes, for example in the character 同.

*This rule applies to the characters with:

6. Inside before outside (for other cases)

7. Inside before bottom enclosed

When there is a bottom stroke, it is written last. For an example, for the character 因, the outside enclosing strokes are written first, followed by the inside component 大 and then finally the bottom horizontal stroke.

8. Center verticals before outside “wings”

Wow, those are a lot of rules.

Did you catch all that? There are a lot of rules to remember. How do you make sure you’re remembering all the exceptions and rules?

Once you have familiarized yourself with the basics, I highly recommend writing out characters as much as you can, using notebooks like this one to keep yourself inside the lines.

It will be tedious. Put on some music to keep yourself focused, or bribe yourself with cookie monster lattes like I do. 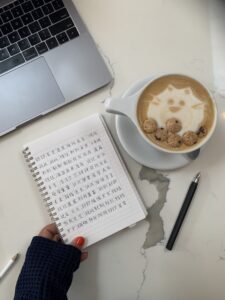 I also invested in some erasable gel pens to make the study process more fun and instagrammable. 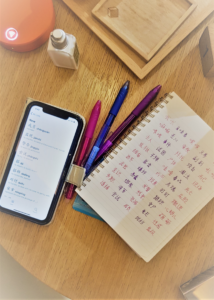 Trust me, the more you can force/bribe yourself to work on your stroke order, the better off you’ll be in the future. You don’t want to have to unlearn a decade of bad habits, like me!

I’ll introduce some helpful apps below that can do a great job of reinforcing what you learn and helping your long-term memory, but definitely don’t skimp on writing by hand.

To supplement (but not replace) your handwriting practice, there are several apps you can use to make the most of dead time throughout your day and make sure that you are reinforcing what you learn.

Very handy app with ready-made “sets” of characters according to topic or HSK level. Click on the character to practice along with the correct stroke order.

Drops has won awards for their alphabet and character packs, which teach Chinese characters, Japanese kanji, Korean hangeul, and more. Follow along with your finger and practice the correct stroke order using their spaced repetition algorithm, and then move on to vocabulary when you are ready.

My favorite dictionary apps are Hanping and Pleco – you can look up Chinese characters using the English word, the Pinyin, or by drawing the character with your finger.

I hope this helps you learn to read and write Chinese. If you have any further suggestions to help other learners, or have any experience with the resources above, please chime in in the comments! 加油 (that means “good luck” in Chinese!)