misslinguistic Comments Off on Mandarin Tones Are Not As Hard As You Think 1,367 Views 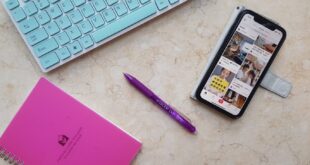 Mandarin tones do take some getting used to, but they are not as complicated as you might think!

I have noticed that language learners often decide not to try learning Mandarin because they are daunted by the thought of using pitch to distinguish meaning. But guess what—Mandarin tones are famous for being among the simplest of all tonal languages to learn.

And I even made a free Mandarin Tones audio exercise to help you get past the hardest part.

Why are Mandarin tones not as hard as you think?

You don’t need perfect pitch to learn Mandarin tones. If you can hear the difference between pitches that rise (like in English at the end of a question) or pitches that fall, you can understand a Mandarin tone. That is because the pitches either rise, fall, dip, or stay the same.

Just to give you some context, languages like Cantonese or Vietnamese also use many of what linguists call “level” tones. These tones stay “level” (they don’t go up or down) and are distinguished simply by being “high, medium, or low”. You still don’t necessarily need perfect pitch, but it is a lot harder to identify these tones out of context.

So if you’re studying Mandarin, just be glad you don’t need to learn level tones!

2) There are only four tones.

Among four other well-known tonal languages, Cantonese and Cherokee have 6 tones each, and Vietnamese has 12 (often mistaken for 6). So once again, let’s give thanks. Memorizing four different pitch directions is really not that hard.

3) Tones are very nicely represented in the Pinyin alphabet.

When you are first learning to pronounce Chinese, you’ll learn the Pinyin (Romanized) alphabet, which mostly looks a lot like English. There are a few differences, in that Pinyin sometimes uses familiar letters in novel ways, to denote sounds we don’t have in English.

But the best part about this alphabet is that it uses lines to represent the tones, and those lines that do exactly what the tone does (rise, fall, etc.)

In Vietnamese, it is easy to mix up the lines denoting tones with accents and other diacritics (markings on top of the letters). The tone markings are not as intuitive.

In Cantonese…well, Cantonese doesn’t even have any standardized romanization system. When one of the many romanization systems is used, they usually use numbers to represent the tones. For 6 tones, 3 of which are level tones, it can be hard to memorize which one is which.

How Long Will It Take Me To Learn Mandarin Tones?

In my experience, learning Chinese at university, learning tones took about 30 minutes of practice, 4 times per week, for about a month. The hardest part was actually learning how to naturally combine the tones in a sentence. Because if you don’t start each tone at the appropriate relative pitch, you’ll sound pretty weird.

In my opinion, it is REALLY hard to do this analytically. It is really hard to think carefully about where to place each tone. You really just need to get the sounds into your head and into your muscle memory, and let your unconscious do the work.

Want an exercise to help you do just that? Since I always get asked for help with tones, I made an audio exercise just for teaching tones to your muscle memory.

Introduction to the Four Mandarin Tones

There are four tones in Mandarin Chinese, which are:

Take a look at this diagram and imagine you are looking at a musical staff, in which the pitches go from high to low. This will help you visualize where each tone begins and ends in relation to other tones. 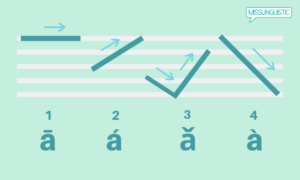 Even once you learn how to pronounce a Chinese syllable correctly in isolation, you might notice the real challenge is putting them all together. You want to make sure that relative to each other, each tone starts and ends at the right place in your own personal “musical scale”.

Usually, the tones will sound exactly as they are visualized above. However, there are two exceptions.

How to Use My Mandarin Tones Exercise (get it here!)

The trick is keeping up the habit on your own. This is why I highly recommend booking a tutor in advance to keep you on track.

This exercise is great for absolute beginners, but is also very helpful for intermediate or advanced learners who aren’t completely confident about their tones.

I recommend downloading the audio and PDF file to your phone or tablet. Then you can practice from anywhere! I like the Tempo Slow Mo app, which lets you slow down the speed without altering the pitch.

If you’d like to go further with your Chinese learning, you can check out my Self-Study Starter Kit: Chinese here on the blog.

If you try out my exercise, please let me know how it went in the comments! And if you have any other recommendations for learning Mandarin tones, we’d love to hear about it!

Share
Previous Shadowing: This Exercise Will Make You Sound Like a Native
Next How Easy Is It to Learn an Asian Language? 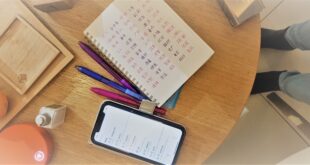